Tropical system may impact Florida coast in next 10 days 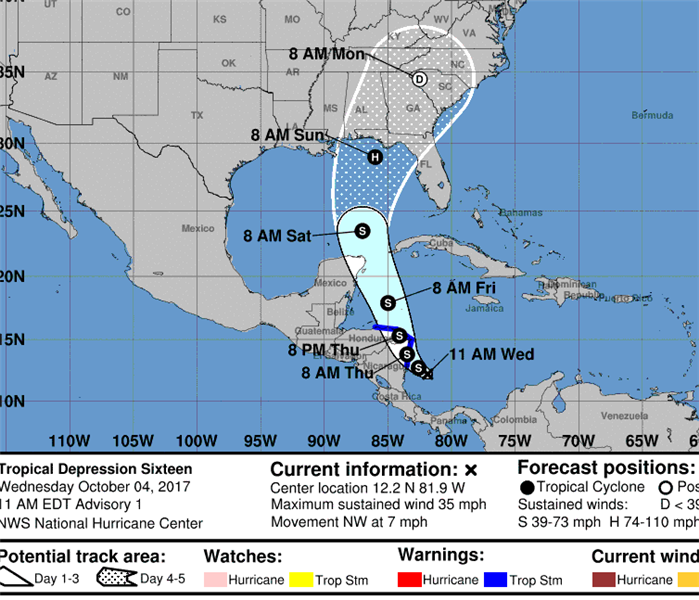 The low pressure evolving over the Western Caribbean & Central America has been upgraded to tropical depression #16 and will likely become Nate.

With Hurricane Irma barely behind us, meteorologists advise that tropical weather may not be over for Floridians this hurricane season, which does not end until late November. Here’s what Accuweather said earlier this week.

The tropical Atlantic Basin has turned quiet for now, but new tropical threats may pose hazards across the western Caribbean, Gulf of Mexico or near Florida well into October.

Following Lee and Maria’s departure, the Atlantic Basin is now void of any named tropical systems, something that hasn’t happened since Aug. 23.

With nearly two months left in the hurricane season, there is still plenty of time for new tropical systems to form and it could happen as soon as late week.

“Multiple factors will be in place that may favor several tropical systems to come about into the middle of October,” AccuWeather Senior Meteorologist Alex Sosnowski said.

A large, slowly-spinning area of showers and thunderstorms hovering near Central America and the western Caribbean will be worth watching over the next couple of weeks. This feature, known as the Central American Gyre, may spin up tropical systems if the right conditions are present.

Residents and those with interests in Central America, Cuba, the Bahamas, Mexico and the southeastern United States will want to keep a watchful eye on this over the next couple of weeks.

“Waters over much of the region are very warm and likely to stay warm for many weeks,” Sosnowski said.

"A tropical depression or storm could develop with little notice in the western Caribbean, Gulf of Mexico or in waters along the Southern Atlantic coast of the United States."

Should a tropical system form in this region, the warm water would provide the necessary fuel for the system to maintain itself and even flourish.

However, much of this will depend on wind shear, or the changing of speed and direction of winds at different layers of the atmosphere. While wind shear will be disruptive at times through the month of October over this area, there will also be times where it relaxes enough for a tropical system to form.

Latest Update from WOKV Jacksonville: The low pressure evolving over the Western Caribbean & Central America has been upgraded to tropical depression #16 and will likely become Nate.