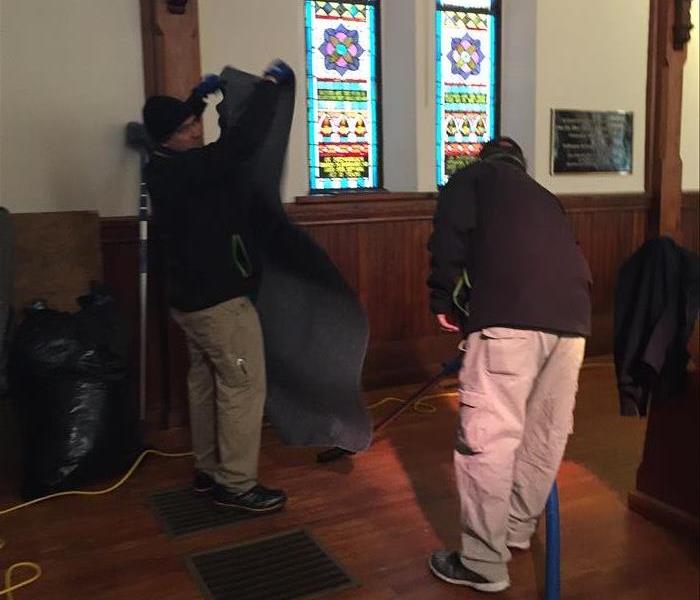 The SERVPRO of Fernandina Beach/Yulee crew had the opportunity to apply their skills in unusually historical and beautiful surroundings recently as we were called in to assist in the restoration of St. Peter’s Episcopal Church in downtown Fernandina Beach.

Floors had been sanded down and refinished and repairs were made before the SERVPRO crew came in to clean the wood dust residue from walls and windows. Stained glass windows were meticulously vacuumed in the sanctuary, which boasts 26’ ceilings. An electric vertical personnel lift was used to access walls and stained glass windows in the sanctuary, which was constructed in 1881.

The church has a fascinating history. A nearby historical marker reads, "The church was organized as a mission in 1858 and was consecrated the following year by the Rt. Rev. Francis Huger Rutledge, first Bishop of Florida. During the War it was used by Federal forces occupying Fernandina and many of its interior possessions were lost. The building was restored to sacred use during the Reconstruction Period, but was destroyed by fire in 1892. The present neo-Gothic church was completed in 1893."

St. Peter's is located at the eastern edge of downtown Fernandina Beach, on Atlantic Avenue between 8th and 9th Streets. The Fernandina Beach Historic District where the church is located was added to the National Register of Historic Places in 1973.

SERVPRO of Fernandina Beach/Yulee provides specialty commercial cleaning services in addition to clean-up and restoration services for water, fire and mold damage. Call us at 904-729-2401 if you need these services at your home or business.