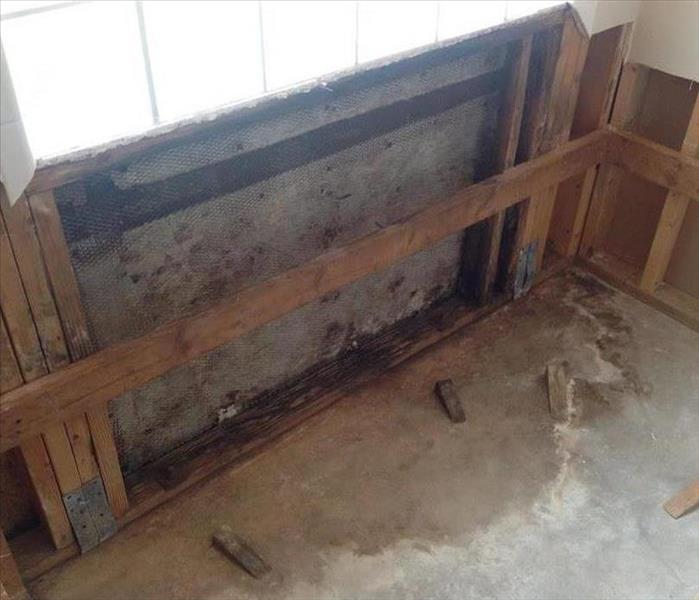 New homeowners on Amelia Island wanted to update their master bathroom. When a cabinet contractor removed the bathroom vanity, it was discovered that the homeowners had a leak somewhere that had resulted in mold growth behind the vanity. SERVPRO of Fernandina Beach/Yulee/North Jacksonville was called in to identify the cause of the mold. Half of the battle of this job was finding the source of the water and resulting mold. Plumbing was initially thought to be the culprit, but once it had been checked thoroughly, our technicians found the real source of the problem: a glass block window above the adjacent garden tub was leaking either due to rain or outside sprinklers or both. Further investigation found that prior attempts to repair leak had been unsuccessful so water had continued to affect the surrounding areas, probably for years.

We removed the backsplash and the tub. The leak had caused significant damage to the framing around the tub. Our technicians could literally crush the 2”x4”s with their bare hands. We put up a containment barrier to keep the mold spores inside the bathroom and cut out all studs that were not load bearing. SERVPRO of Fernandina Beach/Yulee/North Jacksonville removed the mold, repaired the structural damage, and attempted to salvage bath tiles that had to be removed to clean up the mold for potential re-use.

If you have mold remediation issues, call the experts at SERVPRO Fernandina Beach/Yulee/North Jacksonville at 904-729-2401. We’ll restore your property area to a clean, dry space.